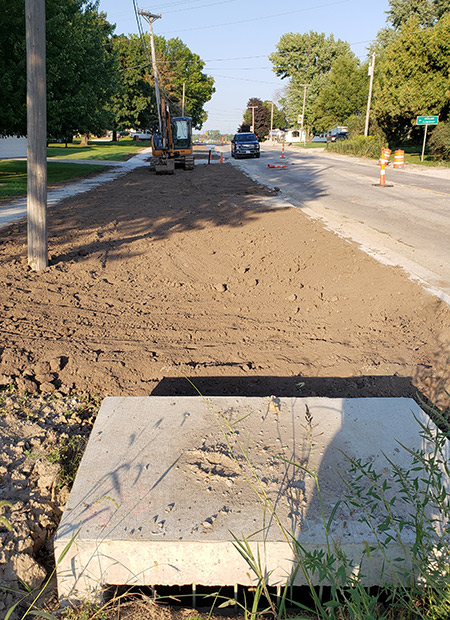 The project included all of Highway 22 within the Riverside city limits which had asphalt surfacing.  The existing asphalt was an overlay over the original concrete highway so had reflective cracking and other pavement distress.  Some areas had been patched several times and the pavement was in need of repair.  In addition, the City was interested in installing curb and gutter in some areas along the highway to eliminate ditches that have been difficult to maintain and to install sidewalks for connectivity in town.  Some of these same areas had undersized and older water mains in need of upsizing and replacement.

The City of Riverside had recently completed two projects which upgraded parking and raised sidewalks and improved drainage and installed decorative lighting in the business district portion of Highway 22.  This project tied into the previous projects to improve the entire corridor which is the main thoroughfare through Riverside.

MMS entered into an agreement with the City of Riverside for final design engineering, surveying, bidding and construction staking, inspection and administration services for this project in November 2017.  We performed the topographic and ROW/boundary survey work, including utility locates and mapping.  From that survey work, the base mapping and topographic information were prepared.  Then we began preparing construction plans and specifications for bidding.  The project had a letting in August of 2018.  The awarded bid price was $1,884,454.00.

This project utilized the HMA Interlayer technology for the HMA overlay portion of the project.  The existing HMA overlay was milled down to the original concrete slab.  The flexible interlayer was installed over the slab followed by 3 inches of new HMA overlay.  This technology is used to help prevent the reflective cracking which is prevalent in HMA overlays over existing concrete pavements.  Because there were many areas where the pavement had to match existing features, the new elevation of the finished roadway had to match the existing elevation as much as possible.  This interlayer design allowed this to happen while providing the additional protection against reflective cracking and premature failure.

Construction began in the fall of 2018 but was suspended through the winter and continued in spring 2019.  The project finished construction in late summer 2019. There were several change orders required for HMA paving per IDOT specifications.  In addition, the City added some sidewalk and curb and gutter after the bid.  Although there were many change orders, there was an overall 6.72% increase in the contract due to change orders, the biggest portion of that was due to the added sidewalk and curb and gutter.